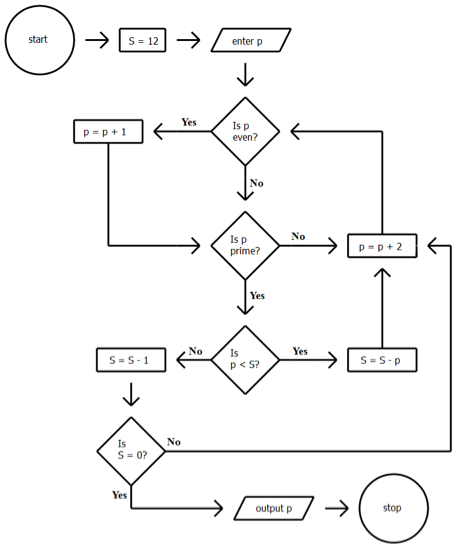 The flowchart represents a mathematical algorithm that takes one positive integer as the input and returns a positive integer as the output. Processes are indicated in the rectangular symbols in the flowchart. Each process is represented by an equation, such as p = p + 1. In this particular process, one is added to the current value of p, and the sum (p + 1) becomes the new value of p. For example, if p = 8 before the process, p = 9 after the process.

OVERVIEW: Without plugging in any particular number, I am going to just follow the process step-by-step and see what I notice.

At the start, S = 12, and p can be any number I enter. The first thing that happens is the question: is p even or odd? If it's even, we add one, making it odd. The only other place in the entire charge where p can change is the "p = p + 2" box --- once p is odd, adding 2 will just produce another odd number, so what happens to p --- if it's even, it is made odd, and once it's odd, it just moves up by 2, through the odd numbers consecutively.

If p is not prime, the number simply repeats that upper loop --- not prime, add 2, is it even? no, not prime, repeat. While going around that loop, S doesn't change. The only opportunity for S to change is if p is a prime number.

What happens when p gets to an odd value? Then we move down to the decision diamond "Is p < S?" That's a crucial place. Since S only starts at 12, most of the time, the answer will be no, S will decrease by one, and if it's not zero, it returns to that same upper loop. Thus, usually, S decrease by one every time p hits a prime number, so p will keep rising until it hits its twelfth prime number value.

BUT, if the input is small, and p actually is smaller than S, then S decrease by p --- that is to say, S decreases not just by one but by several notches all at once: the process accelerates significantly, and it will take far fewer steps to complete the entire process.

Notice, also, the output, the final value of p, will have to be prime number, because the only way that we break out of that upper loop and get to the lower half of the flowchart is when p is prime. The output is always prime.

Those are all the things I notice just scanning the flowchart, without plugging anything in.

Question 1) I will use ordered pairs of the form (p, S) to discuss this. I recommend ordered pairs (or triplets) for keeping track of how numbers change as we move through the steps.

Question 2) Here, the analysis we did above really helps us. For most numbers, larger numbers, S will decrease one notch at a time, and we will have to move p through twelve different prime numbers to reach an output. BUT, if we can have a p get down to the lower half that's less than S = 12, then we can reduce S by a whole lot at once, and vastly accelerate the process.

Suppose we start with p = 10. Also even, so immediate it nudges up to p = 11, which is prime. That would go to the lower loop, and in one fell swoop, S would go down from S = 12 to S = 1! WOW! That's huge! That means there would only one more trip around the upper loop, p goes up to p = 13, also prime, back to the lower half, S goes to zero, and the process outputs p = 13 and is done. That's a lightning fast conclusion! It only goes all the way around that upper loop once!

The smaller starting values, p = 1 (which is NOT prime) and p = 3 will require more than two circuits in the upper loop, so they will take more steps. Of these five answers, nothing else would reach an output as quickly as p = 10. (C) 10

Watch the lessons below for more detailed explanations of the concepts tested in this question. And don't worry, you'll be able to return to this answer from the lesson page.