First, keep in mind that the formula for the area of a triangle is:

Let’s begin by assuming that we have a right triangle, where the base is 8, and the height is 6.

The area of this triangle would be:

The remaining two answer choices (2 and 12) are both less than 24. So let’s see if we can make the area smaller. To do this, we can tilt the red side of the triangle a bit to the right:

Let’s see what happens as we tilt the red side even further to the right:

Let’s think about what would happen if the height actually did get so small that it became zero. The area of the triangle would be:

Since the height never actually decreases all the way to zero, we know the area cannot be exactly zero. But we know that the area can get infinitesimally close to zero. (To see how this works, try calculating the area of the triangle when the height is 0.0001).

Let’s recap what we’ve done so far. We’ve found that the area of the triangle can be 24, and we know that the area can gradually get smaller, until it gets almost all the way to 0.

Now, you might be wondering whether it’s possible for the area of the triangle to be greater than 24. If you are, please read the first question in the FAQ! :)

Q: What if there’s an answer choice that is greater than 24? Can the area of the triangle be bigger than 24? 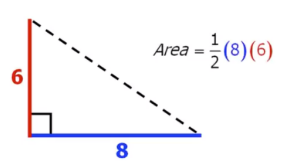 Well, what if we increase the angle instead of decreasing it? We can do that by tilting the red side to the left.

When you free yourself of the restriction of integer measures, you can make a triangle with an area of two and still follow the geometric rules. :)

Q: If the shortest side of the triangle must be greater than 2, how is it possible to have a height that’s so close to zero?

A: Imagine you have a stretchy string that is placed on top of a line on the ground that measures exactly 8. You pinch the string so that your hand divides the string and on one side is exactly 6 units of length and on the other side is exactly 2 units. It's not a triangle yet, but now pull that stretchy string up an infinitely small amount. You have created a triangle with a base of 8 and a height infinitely close to zero. Note that the height can be much smaller than the shortest side of the triangle! You’ll also notice that the third side is greater than 2—albeit by an infinitely small amount, but greater than 2 nonetheless.

Since we can make an area infinitely close to zero, we know we can make a triangle of any area greater than 0 and less than or equal to the maximum area, which is

If you want to look at real numbers, consider this:

Another way to visualize this is by taking another look at the diagram:

Q: Why do we choose a right triangle?

A: Good question! The area of a triangle is maximized when the triangle is a right triangle. If we have an acute or an obtuse triangle, that non-90 degree angle changes the shape of the triangle and we end up losing some height in the process.

Watch the lessons below for more detailed explanations of the concepts tested in this question. And don't worry, you'll be able to return to this answer from the lesson page.